Published on August 2, 2012 by ADCprevention in News and Events 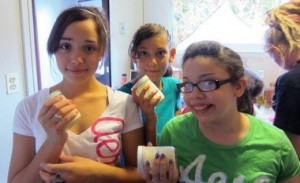 But 11-year-old Ashley couldn’t keep the recipe a secret for long.

“We’re making our own butter,” she announced, smiling broadly as she held up a jam jar whose creamy contents were beginning to turn solid. “We’re going to use it on our pancakes.”

Ashley and her friends were crowded into the kitchen at Duggan’s youth programming headquarters on a recent afternoon, working on a cooking lesson that would end, happily, with a tasty snack.

The after-school programming, which blossoms to a full-day program during these summer months, is brought to the Springfield Housing Authority by ADC Prevention Services and Associates. At Duggan, home to 196 families in the Indian Orchard section of the city, some two dozen children typically pour in after school or on summer days to partake of the fun. Submitted photo Alexy Ocasio and Hussein Iman, both 9, enjoy their time at the Duggan youth program.

Alexy Ocasio and Hussein Iman, both 9, enjoy their time at the Duggan youth program.

Counselor Jessica Tower runs the weekly cooking classes and said she brings in ingredients and recipes that make for fun preparations and healthy eating. An organic baker since she began learning as a child with her aunt, she also aims for recipes that are somewhat complicated.

“We always have a lot of kids, and I want everyone to help,” explained Tower. “So I’m always on the lookout for recipes that have a lot of steps.” On this day, Tower’s plans involved cutting up berries, putting toppings in bowls, shaking heavy cream into butter and making pancakes. The activity took well over an hour, and kept the kitchen a beehive of happy noise and movement. ”

I come here all the time after school,” said Ashley. “It’s like a second home to me. Everybody takes care of each other, and you know everyone. All my friends are here.” Her friend Lexus Kohn, also 11, agreed. “I started coming here a little while ago, and I just kept coming,” Lexus said. “There are always lots of kids here, and they keep you busy,” she said.

“I’d like to take this opportunity to thank you for your insight and showing me a new way to look at life. Even though I may get out of control and loose it, you are still there. Thanks! Thanks for all the help and time you’ve provided.”

“Arnold, You live your life with a focus on purpose. Purpose to change students lives; purpose to offer hope, help and compassion; purpose to teach by example of your own life. Thank you for your many gifts, efforts and wisdom you offer to our staff and students on a daily basis. We are fortunate for the vision and evolution of our program. Thank you for allowing and supporting this to happen. Our students deserve the best.”

“Arnold not only became my son’s mentor, he also became his friend. He sas taught my son that anything is possible. That is why it is so important to have the programs and services that Arnold offers. Because there are children and parents that will benefit greatly from these services.”

“Being at the after school program has helped me improve my grades with the time I can spend doing homework, projects, etc. I can get all the help that I need. Thanks to their help, I am a honor roll student. I haven’t gotten anything below a B this year.”

“The program is like a second home. I like it there. I feel well and I also get tons of help.”

“The only place I feel safe is in the ADC program because they teach you a lot about drugs and positive things and helping you with homework and other things like that.”

“Thank you very much for your services. Randy Jr. has tried to deal with his problem and your service has helped.”

“Dear Arnold, I would like to thank you for what I hear was a very impressive diversity training. Both the youth and the chaperones enjoyed themselves. I am only sorry I couldnt be there. Thank you!”